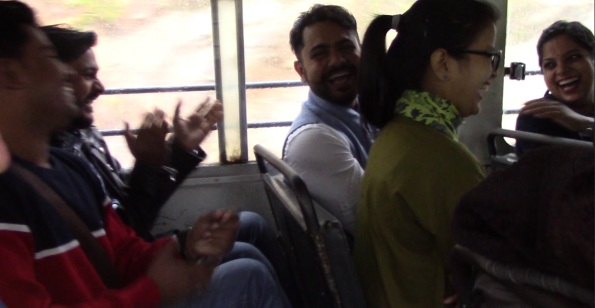 Island Voices were heard in Shillong, India, (the “Scotland of the East”) in October last year as part of the 2019 Year of Indigenous Languages celebrations at North-Eastern Hill University, where they held an “International Language Fest for Indigenous and Endangered Languages”. It was a two-day event with lectures and presentations at the university first, followed by a celebration of linguistic and cultural diversity in the town, with food and clothing stalls and exhibitions, and music and dance performances in many different genres and languages.

Gordon Wells took his camera with him for the Soillse Gaelic research network, and recorded some highlights for the wider “Mediating Multilingualism” project which is being led by the UHI Languages Sciences Institute, funded by the Global Challenges Research Fund. The resulting film, which references Island Voices in several places, has already been uploaded onto the LSI and Soillse websites, and can now also be viewed here. The film, presented in Gaelic and subtitled in English, is in fact multilingual, with the number of languages included well into double figures.

It starts with a two-minute introduction, giving some background and posing some questions as much for Gaelic interests as any other. Then comes the main film, “Dà Dhùthaich, Iomadh Cànan – दो देश, भाषाएं अनेक – Two Lands, Many Languages”, which is under 12 minutes long. This is followed by a brief 6-minute discussion, and a final very short postscript.

And here’s a PDF of Gordon’s presentation, in which he outlined the Island Voices project and some of its technical features (including Clilstore), and explored the potential for “sharing Gaelic voices” with other endangered or minority language interests. New techologies can greatly simplify the recording and film-making process, so enabling wider engagement with and by often marginalised communities. 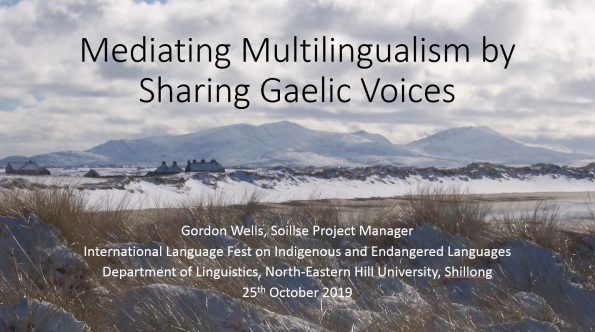 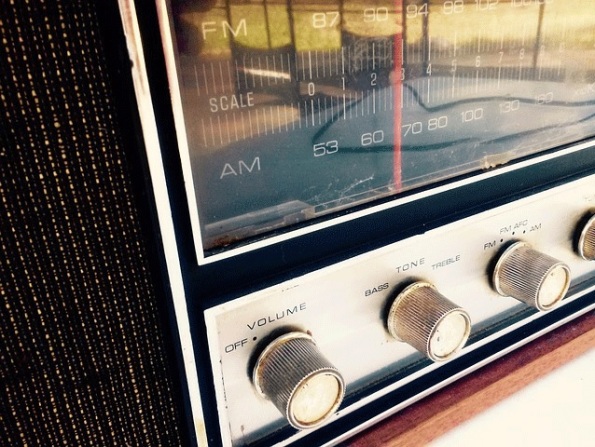 Maggie Smith has been quietly putting a series of fascinating poetry podcasts she’s made on her website over the past few months. With the recent addition of the fourth and final one, the series is now complete. The table below will give you quick links to this full series of poetic Lewis voices. Follow the “Blogpost” link to get to Maggie’s introduction, or go straight to the podcast via “Soundcloud”.

We’ve added it to our dedicated Magaidh Smith page too, where you can also find links to her collections of stories and dramas. Happy listening!

The sharing of Gaelic voices extends to another new language today, thanks to the kind collaboration of Dr Dharani of the Government Arts and Science College in Avinashi. She has now recorded a Tamil voiceover for our documentary on the Uist community newspaper, Am Pàipear, first published eight years ago, with feature stories on Norman Maclean and Tobar an Dualchais.

This emerges as a welcome spin-off benefit from the “Mediating Multilingualism” project in which Gordon Wells is involved through UHI and Soillse. Dr Dharani had already taken Clilstore into new linguistic territory through her interview with Gordon at the International Language Fest in Shillong, available here. Complementing that later with this longer film was then a simple question of translating the script and recording the new narration – all done on a mobile phone and transferred instantaneously from India to Scotland via Facebook Messenger!

Watch this space for more contributions from India soon, and remember new voices and “other tongues” are always welcome on Island Voices from anywhere in the world! 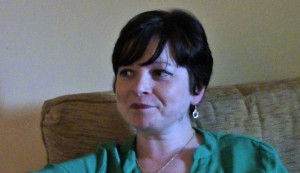 Hughena MacDonald is the next interviewee in this series of conversations with Archie Campbell.

In Part 1, Hughena talks about her family background and her happy memories of growing up and going to various schools in Uist and Benbecula, including her experience of coming across computers for the first time when Sgoil Lìonacleit opened.

This was followed by a spell in Stornoway where she studied at the college and did part-time work, including with Radio nan Gàidheal. On returning to Uist she worked in various places, and raised a family. She describes how she enjoys working with people, and how she likes to relax afterwards.

In Part 2, discussion of the importance of Hughena’s faith to her leads onto broader reminiscence over customs and traditions in the days of her childhood, when casual visits to and from neighbours would be more frequent, often related to crofting matters. Hughena describes early memories of collecting and eating shellfish from the shore, and of baking skills less often put to use these days now that so much is so easily available in the shops. The conversation finishes with some discussion of the strength of Gaelic use in her family, how she’s passed it on successfully to her children, and the value of now encouraging older community members to share their spoken skills, while acknowledging the challenges involved in recording them. 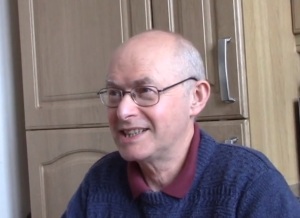 Tommy MacDonald is another figure well-known to Island Voices followers. He appeared in several videos in our Series 2 Outdoors theme, and was the central researcher and interviewer in the Bonnie Prince Charlie set of audio recordings.

With a wealth of local knowledge and stories from his home community in South Uist, he was a natural choice for Archie Campbell to approach for the new Stòras Beò nan Gàidheal project, and one of the first people to be recorded “in the field”.

So here he is again, back in front of the camera. The two of them found a lot to talk about as Tommy retraced his life story so far, including his involvement in Gaelic community life and events, so the conversation has been divided into two parts.

Here’s the Part One video.

The Clilstore transcript for Part 1 is available here.

The Clilstore transcript for Part 2 is available here.